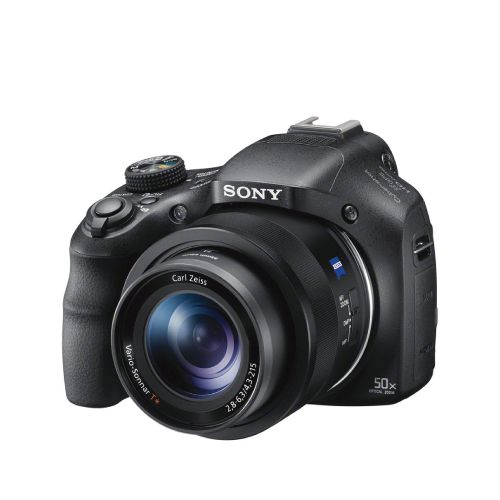 Sony Cyber Shot DSC HX400V is really a good camera and has 50Xoptical zoom, 20.4 megapixel CMOS sensor and has Wi-Fi and NFC with full HD videos at 60 frames per second. There’s a Carl Zeiss logo on the front side. It has three settings on the lens; the autofocus slide zoom, direct manual focus and manual focus. The Sony Cyber Shot DSC HX400V has the ability to take a micro USB and a micro HDMI as well.

On the back you have the screen which actually comes out and tilts up and then down but it doesn’t go like all the way around. If you’re a vlogger the quality is good but like if you want to see yourself then this probably isn’t the right one for you. There is a viewfinder which if you turn the camera on you put your eye. If you put your hand in front of it the sensor turns on and the thing is acts as infrared light.

It has a lot of butons like the movie mode button, playback button and exposure dial playback. Sony Cyber Shot DSC HX400V also comes with a D-Pad which has display exposure flash and then self timer slash, burst mode, the delete/ Help button and the menu button. On the side it is written DSC HX 4-inch V where you have the button to manually switch from the viewfinder to the monitor and vice versa. The microphones happens to be cordless microphones. The mode dial has intelligent auto, superior auto program, aperture priority shutter priority, manual custom modes 1 & 2, video mode and panorama.

Sony Cyber Shot DSC HX400V does feel like a DSLR but it isn’t. It’s a bridge camera as with a silver ring around the lens for decoration. You can’t actually take off the lens for it’s firmly attached on the bottom.

This camera takes a Sony NP BX1 battery X type. There’s different types of types of MPB X 1 batteries though. It has a memory card a Lexar Platinum, a 32 gigabyte memory card in there which works pretty good. It keeps up with all the HD hours and hours of videos. This camera records videos in 30-second segments so not like hours and hours like camcorders.

They also have some information on the camera and the tripod mount. It has a additional 50X optical zoom. It’s a digital zoom because it’s Sony’s version. Tehe clear image mode cannot be used in video mode while you’re filming. Sony Cyber Shot DSC HX400V is 20.4 megapixels, 50X optical zoom and flow HD video at 60 frames per second. It also comes with WiFi and NFC.